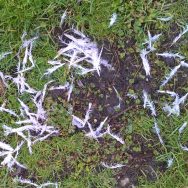 On Friday 26th January, I was woken up ahead of my normal 530am time by what appeared to be a chicken celebrating an early morning egg. When doing the rounds  of letting dogs out, feeding the chickens etc, I noticed one of the chickens was a bit bedraggled. Mavis appeared she had gone for a swim in the river, which is a bit odd. The penny dropped, foxes had made a visit and despite getting away with nothing, had spooked one of the girls into the river. That at least, was how it seemed. END_OF_DOCUMENT_TOKEN_TO_BE_REPLACED