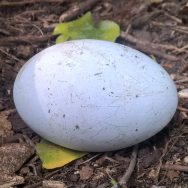 Another day of the morning routine. Wake up. Make coffee. Let chickens out. The half-awake routine was wonderfully interrupted by something other than the chorus of eager chickens wanting to break out of their house and have breakfast. There was a big egg in the run. Bluey greeny sort of thing that had to have come from something much bigger than a chicken, after all, it seemed to weigh about as much as one of the chickens so the hole it came out of was much larger than the ones chickens had. END_OF_DOCUMENT_TOKEN_TO_BE_REPLACED